Protecting Your Kids Online Is Not Spying - It's Your JOB!

Kids In Touch Has Shutdown 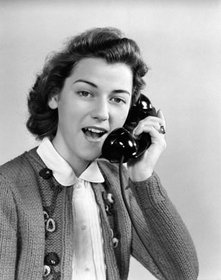 When I was growing up in the 70's, I had an older sister in her teens. Of course, she loved talking on the phone. She would talk to her friends and potential boyfriends while sitting on a chair in the kitchen. Looking back, I remember seeing my mom in the kitchen ANY time that phone was in use. Strangely, she'd be washing dishes or cleaning even though she'd already done it earlier in the day and there was really nothing left to do. Yet, she was there every time, puttering around.

A few years later, we had apparently "moved up in the world" and had a second line in my mom's bedroom/office. Now, when my sister got calls, she would lay on my mom's bed and chat away. My mom no longer hovered over her. Instead, she insisted that I stay in her bedroom and play games with my other siblings. This irked my older sister to no end. She'd put her hand over the receiver and screech that we had to, "Get out!" Well, we weren't dumb. Our mom had given us our marching orders and there was no way my sister could trump them. So, she just had to deal with it!

Now, all these years later and as a parent, I know exactly what my mom was doing. She was protecting her daughter. She was doing her job. By making sure someone was always there listening in, she was ensuring her daughter was safe - safe from inappropriate conduct, safe from mischievous boys. No one would EVER consider what my mom was doing as spying. In fact, if you didn't do these things, you were a bad parent.

Since launching a kid-safe texting app, I've been told several times that I shouldn't allow parents to "spy" on their kids. I've read many articles about how monitoring your kids social media steals their sense of identity from them.

This is all a bunch of hogwash as far as I'm concerned. Yes, you should give your kids enough space to grow on their own. Yes, they need to experience the world and make mistakes and learn and grow. However, that doesn't mean you as a parent should leave them wholely unsupervised on the internet. Just as you would not drive a young child to the roughest part of town and drop them off, you should not drop them off on social media. Just as you would not expect them to be safe in a room full of predators, you should not expect them to be safe on Tinder.

Our parents didn't shirk from their duty. We should not shirk from ours just because it's a brave new world with new technology. Here's how Denise DeRosa from Cyber-Sensible puts it:

Your number one priority is to keep your kids safe from harm. Part of that responsibility now involves safety online. What you need to do is educate yourself on the social media platforms your kids are using, learn how to use them yourself and insist that you review their privacy settings on each platform together. It is okay to prohibit them from using any platform that you think has too much potential for harm (i.e. Kik, Omegle or AfterSchool). Think they are hiding something from you? Learn how to find hidden apps.